She shot to fame while appearing Gogglebox in 2014, winning the audience over with her infectious personality and sense of humour.

But Scarlett Moffatt has now spoken out about her struggles in the spotlight – particularly at the hands of trolls – in a new interview with Grazia magazine.

The 30-year-old TV personality revealed she has been subjected to relentless online trolling over the years and feels ‘lucky’ she was able to escape from a dark place. 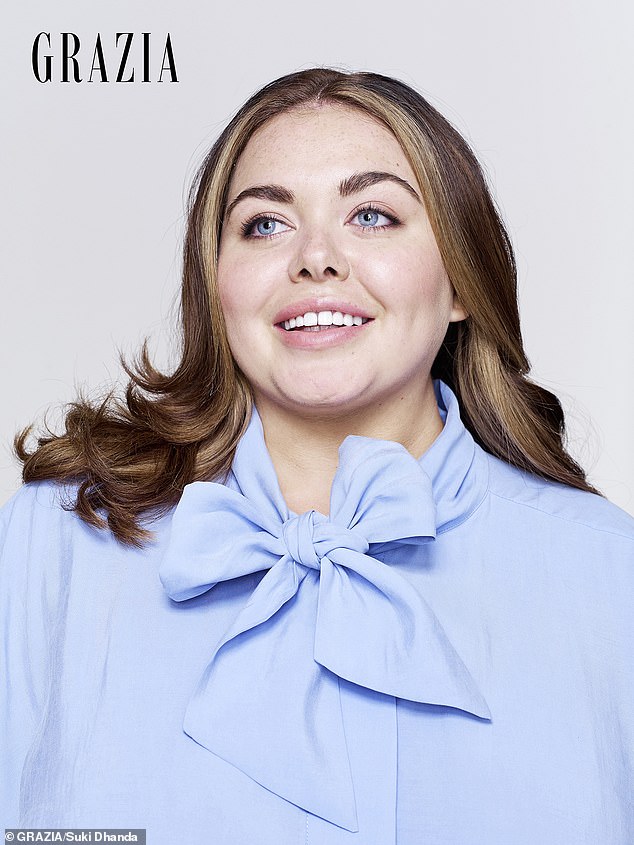 Emotional: Scarlett Moffat has spoken to Grazia magazine about how difficult life in the spotlight has been thanks to relentless online trolling

Scarlett detailed in the magazine how she worked in Asda when her friend told her about Gogglebox to which she mused: ‘It’s £50 and a free takeaway, what’s the worst that can happen?’

Following her family’s first appearance on the show, Scarlett said that the online abuse began instantly.

She recounted: ‘We got Twitter so we could chat to people while it was on. Immediately, I started getting really horrible messages about how ugly, fat and stupid I was. 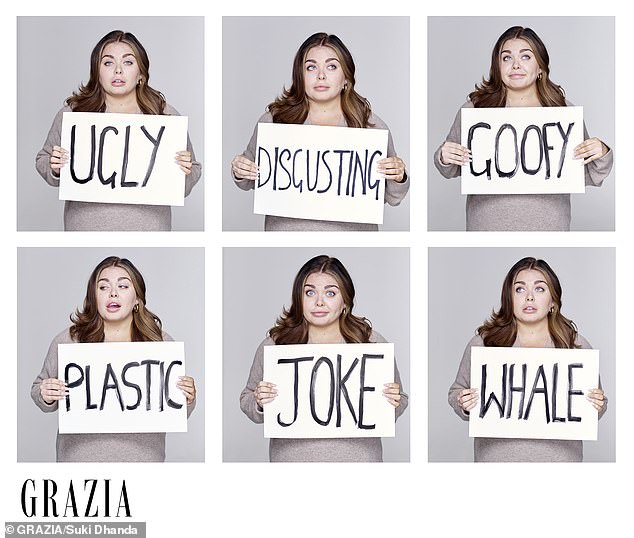 Cutting words: In one powerful image from her accompanying photoshoot, the beauty is seen holding up various boards that spell out hateful words trolls have called her in the past

‘All of a sudden, all of these people, who didn’t even know me, were forming opinions about me from five minutes on a half-hour show. It hit me hard.’

However, she stuck with the show and two years later in 2016 appeared on I’m A Celebrity… Get Me Out Of Here!, from which she walked away victorious.

She shared: ‘I felt very lucky. Looking back, at that point I realise I had been put on a pedestal. In the press, it was just nice story after nice story, and then, with Ant And Dec’s Saturday Night Takeaway – I was a co-presenter for a time – it was the same thing. 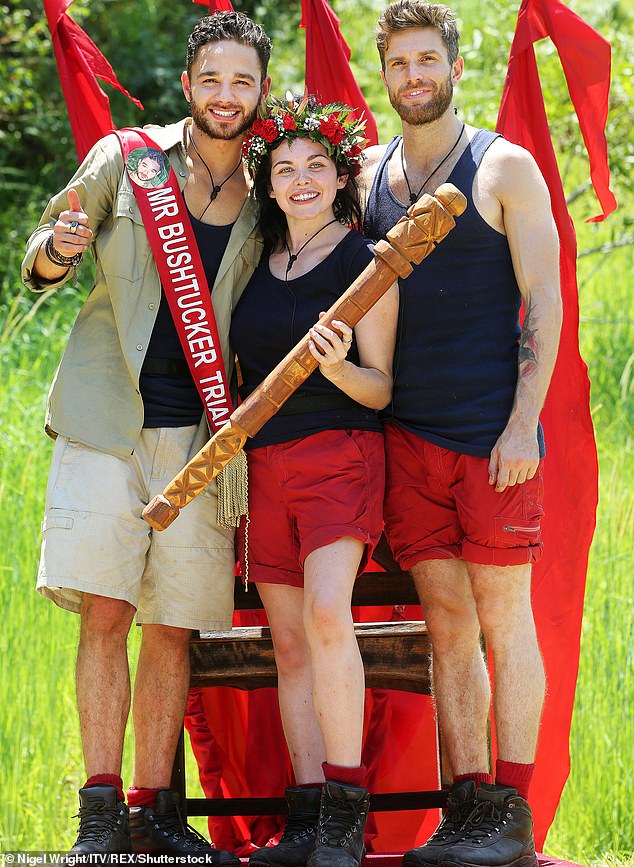 Looking back: Scarlett was trolled following her time on Goggle Box things changed when she won I’m A Celebrity in 2016. Pictured with (L-R) Adam Thomas and Joel Dommett in 2016

Things took a turn once again when trolls targeted her teeth which has always been a big insecurity.

During her interview, Scarlett also spoke about her ‘one biggest regret’ which was her 2017 fitness DVD which was ‘sold to [her] as a dream’ when she had ‘no representation.’

The star shared: ‘I put my name to something I don’t even believe in. My sister is 13 now, and when I think about her obsessively trying to lose weight or looking at before and after pictures, it really upsets me.

‘But back, then I was so naive, I had no idea how damaging it would be for my mental health – as well as other people’s.’ 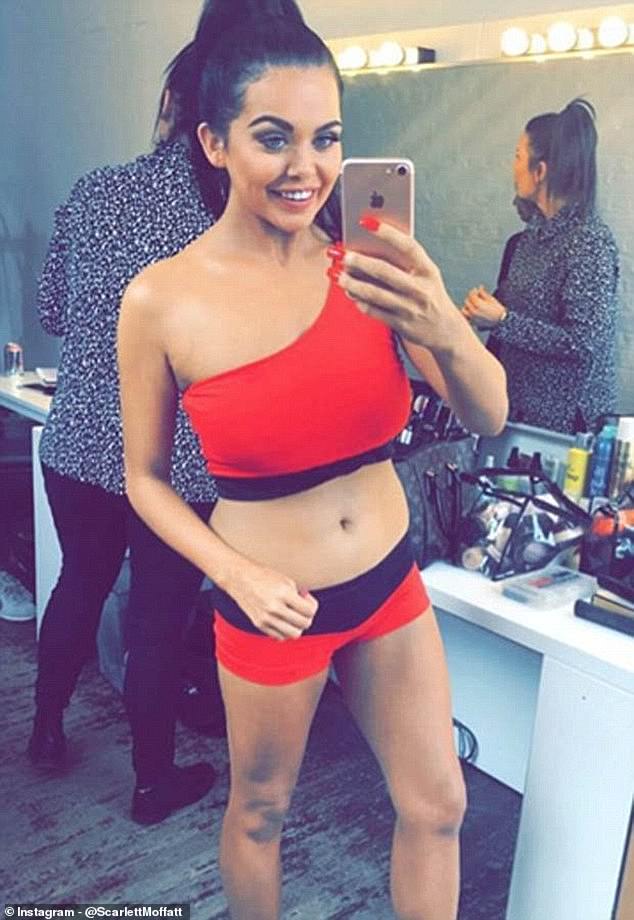 Regrets: Scarlett said her ‘one biggest regret’ was her 2017 fitness DVD which was ‘sold to [her] as a dream’ when she had ‘no representation’ (pictured in 2017)

The star continued: ‘The company wanted me to lose around four stone but, about halfway through following the exercise and nutrition plan, I just stopped losing weight. It was as if my body was just like, “No, this is what you’re meant to look like.”

‘I remember trying to soldier on but thinking the whole time, “I actually really don’t want to do this at all”. But I’d signed a contract and, when I tried to get out of it, they told me that I would owe them loads of money if I dropped out.

‘I didn’t have anything close to the figure they wanted, so I had to go through with it. In the end, I was never actually paid a penny.’

The star said this is ‘when everything spiralled out of control’.

She continued: ‘All of the trolling overwhelmed me. I stopped leaving the house, instead spending hours on Instagram reading nasty messages, searching hashtags of my name and reading the comments under online articles.’ 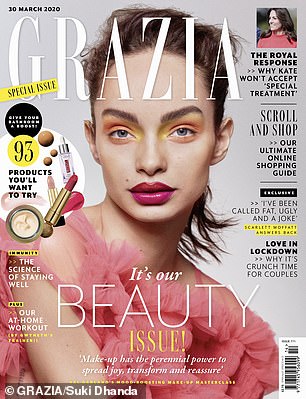 Scarlett spoke about her appearance on Love Island After Sun and the online abuse that she received after that eventually caused her to call the Samaritans helpline.

However, things got better for the reality star when she finally confronted her mum and went to therapy for a year.

Now she feels she has grown as a person, not just coping with online bullies but in her own self confidence.

Scarlett looked sensational for the photoshoot accompanying her revealing interview, as she posed in a pale blue pussy bow blouse.

In another powerful image, the beauty is seen holding up various boards that spell out hateful words trolls have called her in the past.

See more of Grazia‘s interview with Scarlett online at graziadaily.co.uk 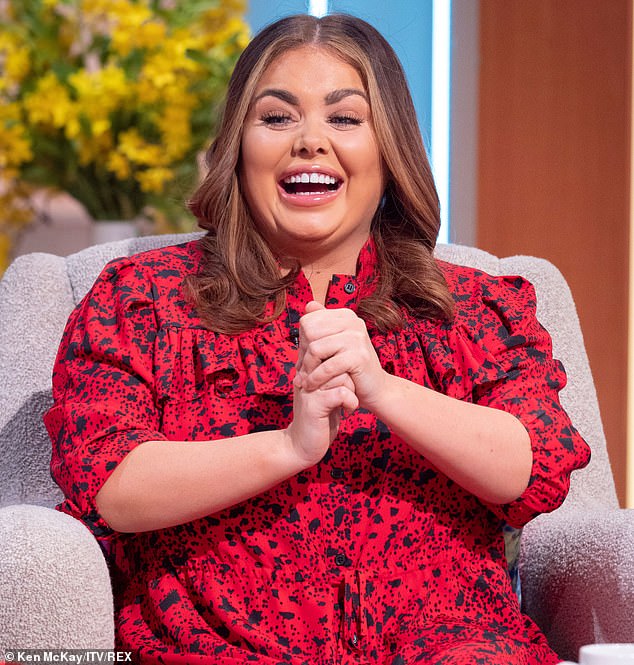 Strong: Following years of online trolling which eventually led her to call the Samaritans hotline the star has found herself in a more confident better place