Neil Diamond’s Sweet Caroline went from being a top 10 hit in 1969 to a staple at sporting events across the country.

Now the 79-year-old singer–songwriter has created a version of the single featuring new lyrics referencing handwashing and social distancing.

He shared a clip of himself playing part of the song while self-isolating at home on Sunday as he did his part to halt the spread of the coronavirus. 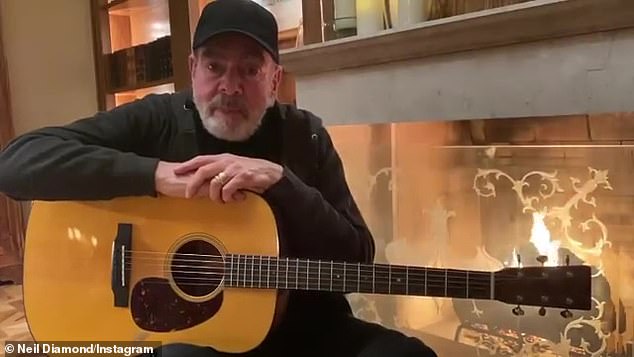 Diamond looked cozy as he sat in front of a crackling fire, though his fans got a closeup of his adorable Golden Retriever before he spoke up.

‘I know we’re going through a rough time right now,’ he began, ‘but I love you, and I think maybe if we sing together, well, we’ll just feel a little bit better. Give it a try, OK?’

The Cracklin’ Rosie singer strummed on his acoustic guitar as he started off Sweet Caroline in his still-strong voice.

The first verse was unchanged, but the pre-chorus had turned into a call for proper hygiene and distancing. 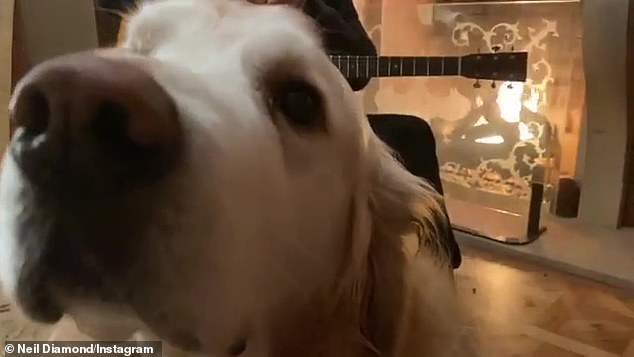 Staying safe: Diamond recorded the song at home with his Golden Retriever as he sat in front of a roaring fire with his acoustic guitar 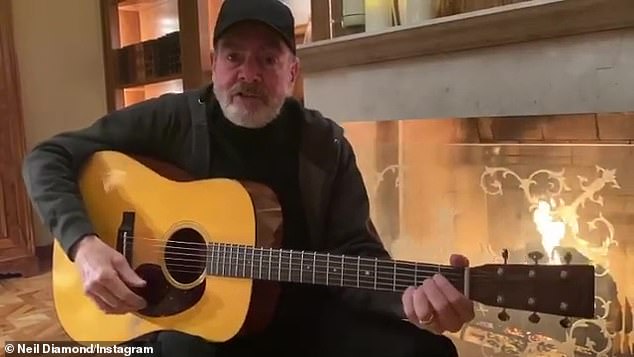 Sticking together: ‘I know we’re going through a rough time right now,’ he began, ‘but I love you, and I think maybe if we sing together, well, we’ll just feel a little bit better. Give it a try, OK?’ he said at the start

The next line, ‘Reachin’ out, touchin’ me, touchin’ you’ didn’t work in a world where people are trying to keep their distance.

Of course, the song is most famous because of its undeniably catchy ‘Sweet Caroline’ chorus, and Neil didn’t touch that part at all. 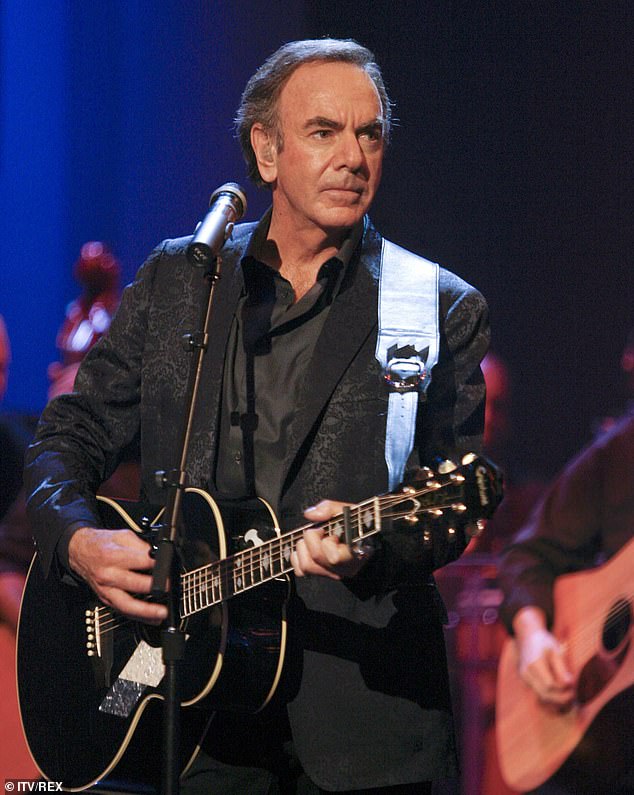 Staying clean: Instead of ‘Hands, touching hands,’ he now sang, ‘Hands, washing hands’ in the pre-chorus

He didn’t have anyone else to sing the ‘ba ba ba’ part that baseball fans shout out during down time, but his guitar licks filled in the space nicely.

‘Stay safe out there!’ he captioned the short video.

Neil’s light-hearted song referenced legitimate public health advice. In order to slow the spread of the coronavirus, people are urged to wash their hands for at least 20 seconds in warm water before eating, after using the bathroom, and after coming into contact with anyone who’s sick.

People are also urged to stay at home as much as possible and to stay six feet away from others if they have to go out in public. 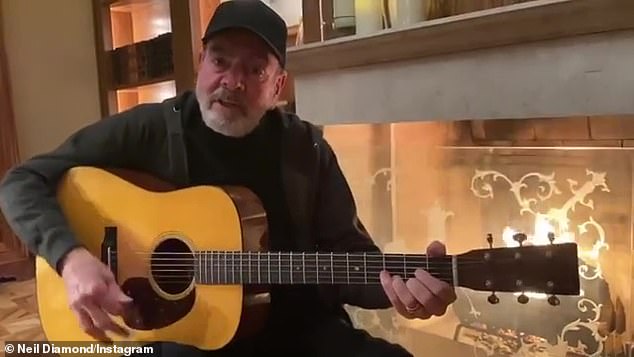 Keeping his distance: The next line, ‘Reachin’ out, touchin’ me, touchin’ you,’ was replaced with, ‘Don’t touch me, I won’t touch you’ 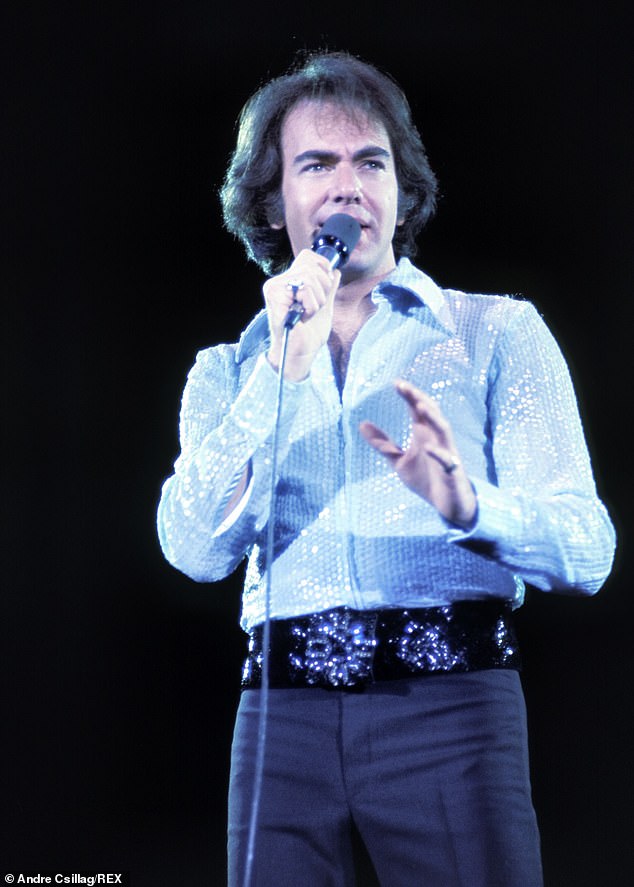 Sweet Caroline was originally released in August 1969, when it climbed to number four on the Billboard Hot 100 chart.

In 2007, Diamond revealed to the Associated Press that Caroline Kennedy, daughter of President John F. Kennedy, had been the original inspiration for the song.

That year, he performed Sweet Caroline via satellite for her 50th birthday celebration.

But in 2014, he claimed on the Today Show that the song had actually been for his ex-wife Marcia Murphey, and he’d only used ‘Caroline’ because he needed a three-syllable name to fit the lyrics. 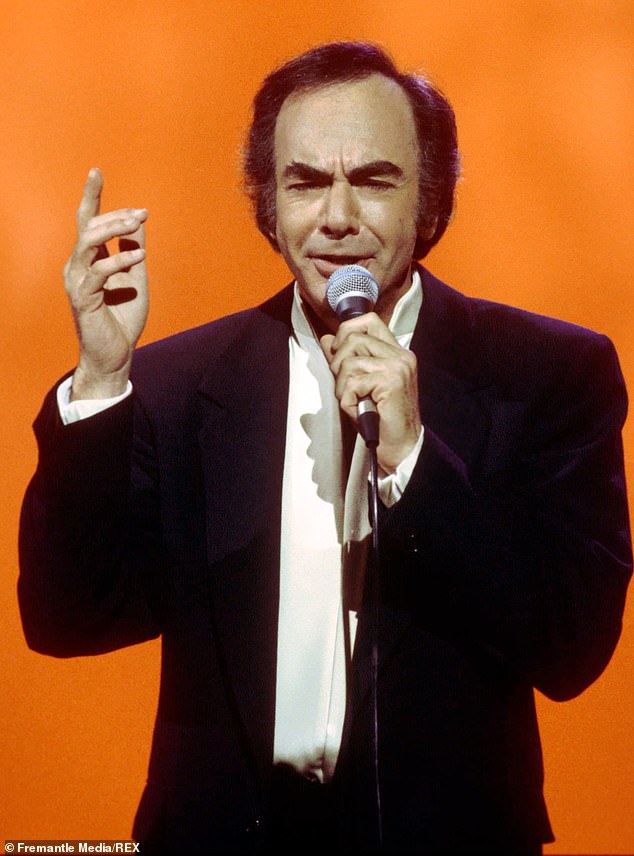 Changing story: Over the years, Diamond claimed the song was alternately about Caroline Kennedy and his ex-wife Marcia Murphey