By Christine Rendon For Dailymail.com

And Jonah Hill was looking like a natural as he caught some waves in Malibu on Tuesday afternoon.

Not only was Jonah, 36, able to enjoy some time in the water, but he was also practicing social distancing, surfing solo amid the coronavirus pandemic. 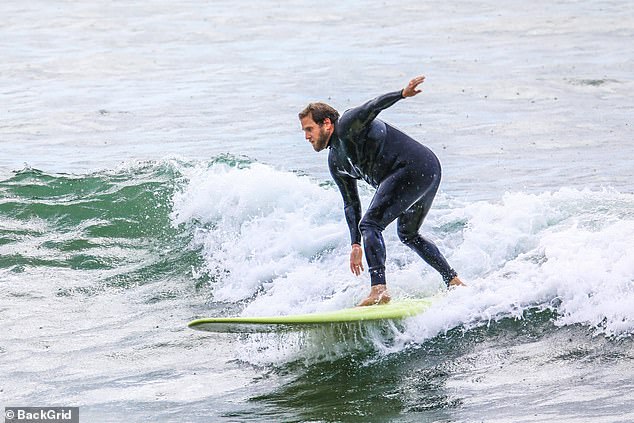 Surfin’ USA! Jonah Hill made a splash once again as he caught some waves in Malibu on Tuesday afternoon

The actor cruised across the water onboard a lime green surfboard while wearing a black wetsuit.

Jonah laid on his belly as he paddled in front of an incoming wave, before jumping to his feet to catch it.

Once he gained traction, the star raised his hand into the air for balance whilst carefully standing upon the board as it glided across the waves.

Jonah caught at least a few waves during his outing, however wasn’t always so successful. 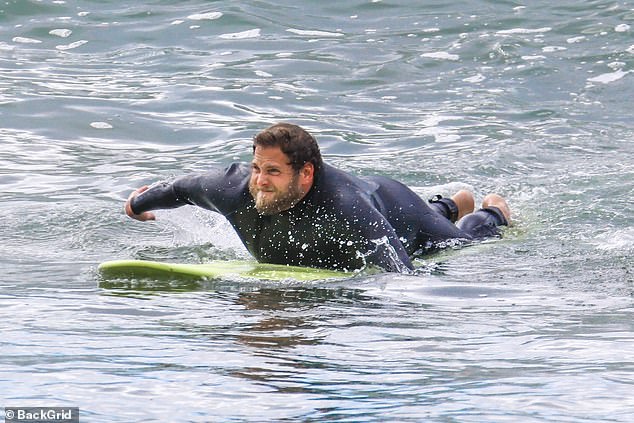 Making waves: The actor paddled across the ocean blue while laying atop the lime green board 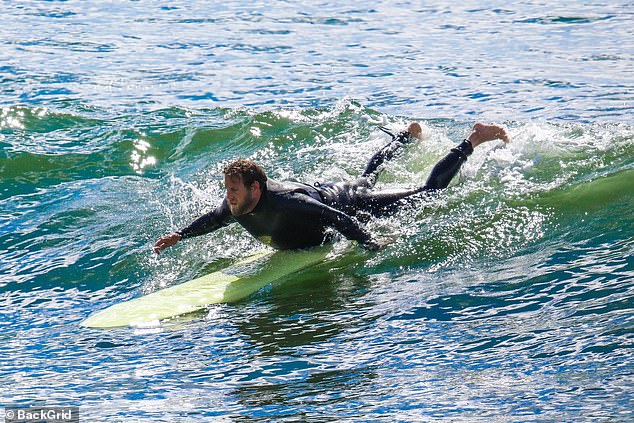 Let’s do this! The actor appeared to be on the verge of catching a wave 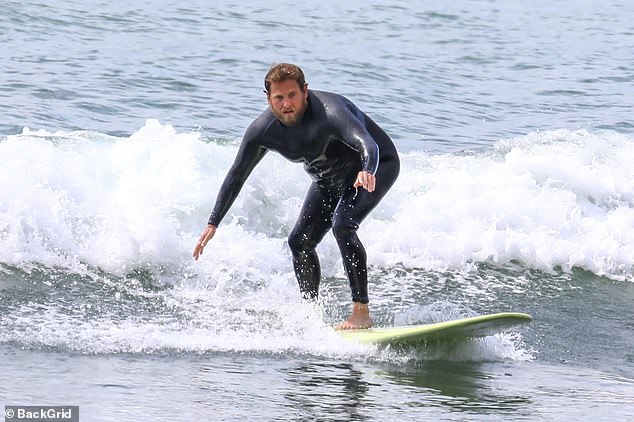 You got this! Hill has become an avid surfer after overcoming his fear of the water sport

At one point, he did appear to take a bit of a tumble.

Once Jonah was all done with his surfing session, he carefully meandered through a rocky path barefoot while carrying his board overhead.

Two-time Academy Award nominee Jonah – who is engaged to fiancee of six months Gianna Santos – previously said he always had a dream to surf but was too scared to give it a go. 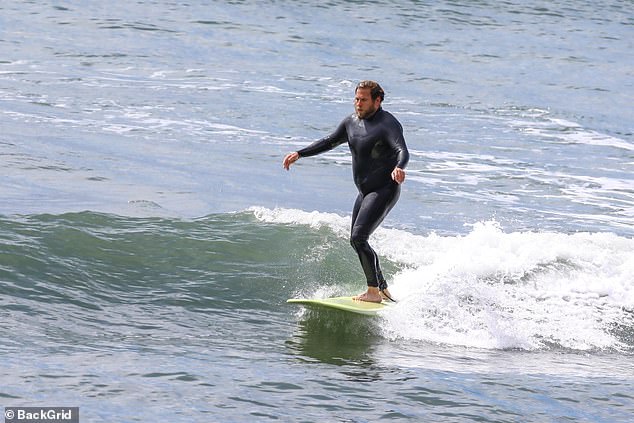 What a pro! The Wolf Of Wall Street actor balanced effortlessly atop the board 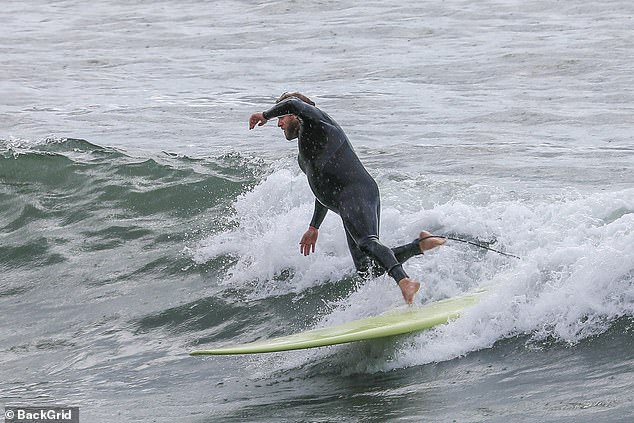 Wipe out! The actor tumbled towards the water after unsuccessfully going for one of the waves 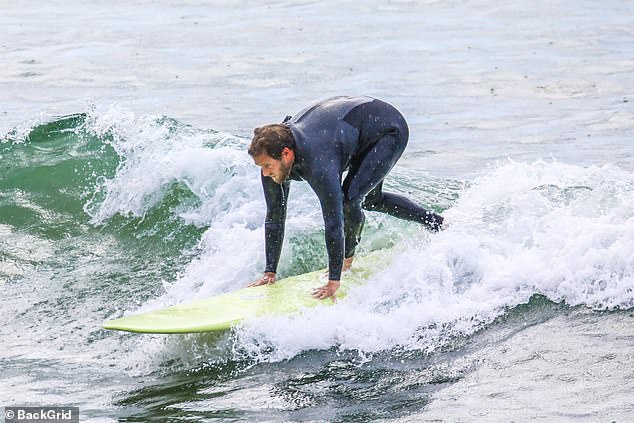 You got this: Hill steadied himself atop the board as he cruised over one of the waves

That changed last August when he decided to conquer his fear and then talk about it in an Instagram post.

‘Been terrified to surf my whole life. Totally random fear and at the same time always been a secret dream of mine,’ the actor captioned a picture of himself with a friendly instructor.

‘Turned out to be one of the most fun experiences I’ve ever had. Not only was it so fun and challenging but more so I’m like ‘damn, at 35 you can start doing s**t you’ve always wanted to do.”

The star proudly captioned this: 7 months of [surfing emoji]. Anything is possible.’ 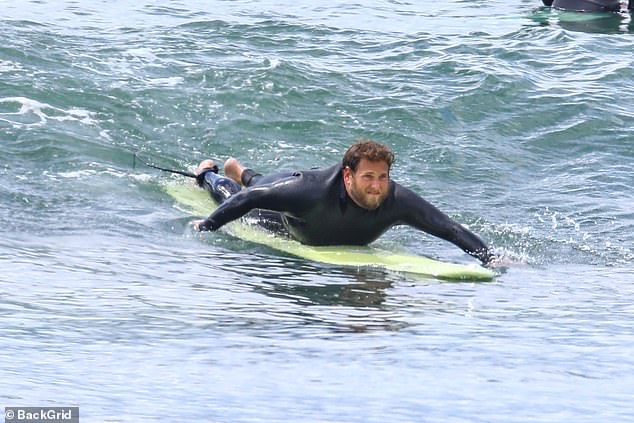 California cool: The actor was clad in his wetsuit as he caught waves out in Malibu 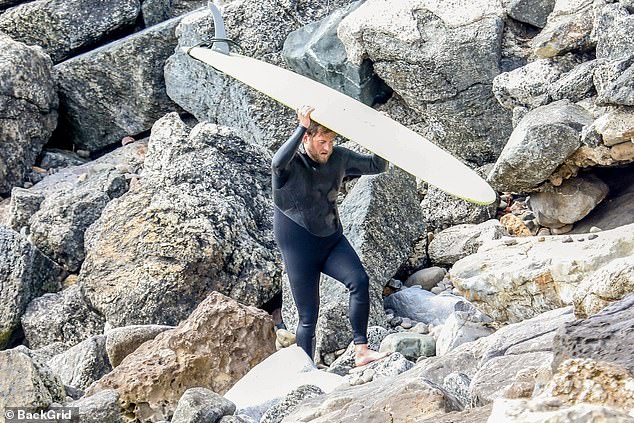 Rocky road: The star navigated his way through a rocky terrain barefoot following his surfing session